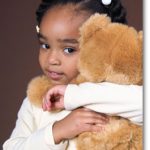 In a recent survey, participating facilities felt patients were comforted and reassured by receiving Operation Hug bears.  A thank-you note was received from a mother of a little girl who received one of the bears at St. Luke’s North Hospital.  She wrote, “This summer my daughter and son were playing with scissors when my son accidentally cut his sister’s face and lip.  We went to St. Luke’s North for stitches.  My daughter was very upset and scared to be there until the nurse brought her one of your bears.  She is fully recovered now with very little scarring and sleeps with her bear ‘Luke’ every night.  Thank you for such a wonderful program.”

Another mother whose child received a bear wrote, “last night my daughter was in the hospital with a nasty stomach bug.  Once the hospital staff got her feeling better, they came by with an adorable little bear for her.  It totally brightened her night.  I want to thank your group for providing such a nice bear for her.  She is actually holding onto it now as she naps.  Your kindness has put a smile on her sick little face and has touched my heart tremendously.  Thank you for your generosity.”

Yet another mother wrote, “My daughter received a bear when she was two and had tubes put in her ears.  She picked it up that day when she was scared and unsure of everything and has not put it down since.  She absolutely loves that bear!!  Thank you for this service and for helping provide comfort to my little girl when nothing else could.”

A nurse said this about Operation Hug: “At times the bear is as much comfort to the mom as it is to the child.”