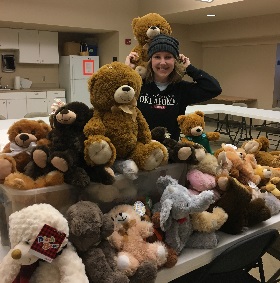 Since 1988 Assistance League of Norman members have provided cuddly bears to children in the community who are in the midst of a crisis or facing a traumatic event.  Bears are distributed to children through local agencies such as the Norman Police Department, Food and Shelter for Friends, and Norman Regional Hospital.

This year alone we have delivered 430 snugly friends to homeless, injured, and/or traumatized children.

Norman police officers keep a stash of bears in the trunk of their patrol cars and share them at their discretion.  A bus full of students involved in a traffic collision this year were given animals to hug.

A spokesperson from the Norman Regional Health System said he has seen first hand that giving a scared child an animal to love immediately calms them down for a necessary test or procedure in the ER.  He says we give many more bears in the winter months due to complications caused by the cold and flu season.