The lobby at the restaurant Vicky’s of Santa Fe in Indian Wells was busy Tuesday morning, only not with hungry customers but rather people hungry to help. 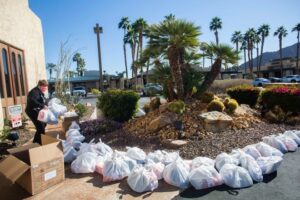 Assistance League Coachella Valley, a group of charitable volunteers, had set up a mini-assembly line as they filled bags with shoes, socks, underwear and shirts to give to students in need at three Desert Sands Unified School District elementary schools. In all, approximately 300 students will receive a bag of clothes, which also includes a hygiene kit.

It’s part of a national initiative called Operation School Bell® and usually takes place in August or September to help provide back-to-school clothes for children who otherwise are unable to afford it.

This year, the coronavirus has altered the traditional game plan. With kids not returning to in-person schooling and with Assistance League unable to do some of its typical fund-raising events, the volunteer group had to get creative, but didn’t want the school year to pass without doing something.

“Today, we’re packing supplies for 300 students, and that’s a small number for us. Typically, we’d do about 1,000 bags at a time and about 3,200 to 4,000 throughout the school year,” said Jill Beighley, the president of the Assistance League Coachella Valley. “The need is even more than in prior years, but the challenge is finding the right people. Quite frankly, our funding sources are more challenged this year as well.”

The way Operation School Bell works is the schools identify students that can use the assistance and then provide a list of names and info like shirt size, to an Assistance League volunteer, who then puts together a bag of items tailored to that boy or girl.

On Tuesday, a group of about a dozen members of Assistance League was working safely and efficiently assembling bags for the donation. Rows of shoes and socks and underwear and shirts and hygiene kits were lined up on a table. Then, trick-or-treat style, one person would walk through with a bag and at each station a different person would drop an item in. Everyone involved was wearing masks and stationed an appropriate distance apart. Once someone had a full bag, they took it outside and put it in a bin, grabbed an empty bag and went through the line again.

Those bins were then loaded onto a DSUSD van and delivered to the school. Each school then sets up a time for the family to stop by and get them safely.

The underlying spirit of Operation School Bell is to provide these students with a confidence about themselves that new clothes can bring, which will in turn make the child more excited to go to school. It’s a national initiative that the Assistance League in the desert has participated in since 1996.

The all-volunteer group composed mostly of senior citizens has clothed more than 50,000 children in the desert in that time.

“It’s amazing the reaction we’ve gotten over the years, beautiful letters from parents and kids. One little boy said ‘Thank you so much it makes me feel proud to go to school in my new clothes.'” said Judy Pearson, the chair of marketing communications for the group. “It’s been very heartwarming, and we do other events during the year for veterans or single mothers, but this is the one that people seem to have the greatest affinity for.” 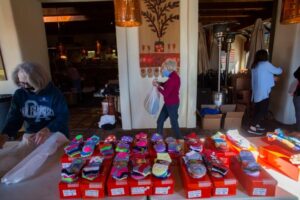 She said with children attending classes almost exclusively via distance-learning, they’ve changed the items in the bag. New pants became less of an urgency and were replaced with shoes this year and extra socks. But one thing that didn’t change is the school-specific shirt. It’s a source of unity, she said.

“We know there’s a need for certain things regardless of whether they are going to school or not, and interestingly our schools are all saying that everyone still really wants the school shirts with the school name or logo on them,” Beighley said. “Wearing the school shirt on their Zoom conferences gives them that sense of community like they’re actually in school and part of that school family.”