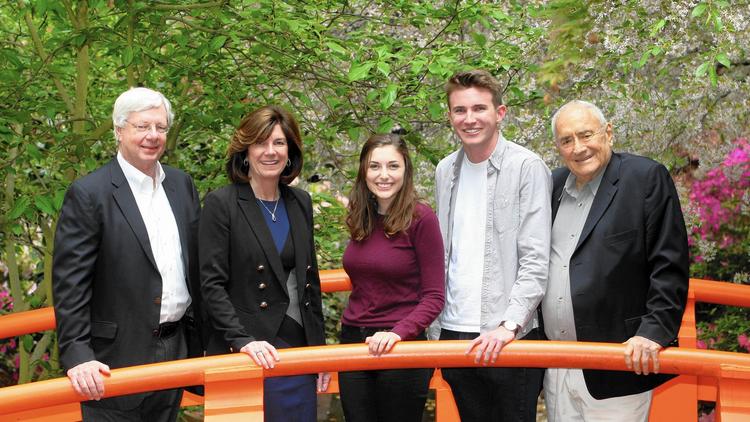 Five individuals, including two La Cañada High School students, have been selected winners of this year’s distinguished Les Tupper Community Service Awards and will be celebrated in an April 11 ceremony at the Jet Propulsion Laboratory’s von Karman Auditorium.

The awards are a hallmark event of the La Cañada Coordinating Council, a nonprofit organization created to assist the area’s many local volunteer and service organizations by offering a clearinghouse of public information that lets groups better coordinate schedules and events.

In 1965, members of the council awarded the first Community Action Awards to groups and individuals who demonstrated outstanding volunteer service. The awards were renamed four years later as a memorial to Leslie (Les) C. Tupper, a La Cañada resident and Los Angeles attorney whose involvement as president of the Coordinating Council and chairman of the school board earned him the moniker “Mr. La Cañada.”

Coordinating Council President Joe Thompson said members consider a nominee’s long-term, broad-based community service when deciding on the winners. Student recipients must be actively involved in service-related activities on or off campus to be eligible.

“We’re looking for individuals who’ve been in the community for a long time and have made significant contributions to the community through their service,” Thompson said Monday. “We want to recognize what they’ve done, but the other purpose is to let people in town know what’s going on and how they can contribute to making this city a better place to live.”

Walker served as member and chair of the city’s planning commission and public works and traffic commission before being appointed to city council in 2015. She’s known for holding several positions with the La Cañada Flintridge Chamber of Commerce Assn., including president of the group’s board of directors and a member of the La Cañada Business Support and Development Committee.

She is currently a member of the YMCA of the Foothills Board of Directors and the Flintridge La Cañada Guild of Huntington Hospital. In 2008, Walker was named the chamber’s “La Cañada Businesswoman of the Year.” Three years later, Kiwanis Club members selected her “La Cañadan of the Year.”

Voss’ record of volunteerism dates back to 1997, when he served as chair and member of the executive committee for the San Gabriel Chapter of the Red Cross’Board of Directors and trustee for the La Cañada Flintridge Educational Foundation Endowment Fund.

With years of experience in the banking industry, he was selected city treasurer in 2001 and was later appointed to the City Council five years later, where he served as mayor in 2010. In those capacities, Voss has worked on several citywide and regional matters such as historic preservation, water issues and the 710 Freeway Tunnel project, to which he’s lent vocal opposition.

A resident of La Cañada since 1982, he is married to Lynn De Groot Voss and has two adult sons and two grandchildren. Last week, Kiwanis Club members announced Voss would be officially declared “La Cañadan of the Year” in a May 4 ceremony at Descanso Gardens.

A retired JPL employee, Wallace has lived in La Cañada with wife Beverly for the past 53 years, where the couple raised their children and participated in a number of community programs. In addition to his involvement in the Indian Guides and Explorer Scouts programs, Wallace was also a football coach and member of the parent board for the Crescenta-Cañada YMCA swim team.

He has held a number of leadership positions with the city’s Tournament of Roses Assn. since becoming a member in 1978, including association president. He served on Community Center of La Cañada Flintridge Board of Directors from 2003 to 2009 and is a current member on the La Cañada Irrigation District Board of Directors.

Since 1996, Wallace has been an active member of the board of the Kiwanis Club of La Cañada. He’s worked on the group’s committee for “La Cañadan of the Year” and helped prepare barbecue for the chamber’s Fiesta Days Memorial Weekend celebration.

Dorse, 17, served as president of her seventh-grade classes at La Cañada High School and never looked back, being elected to class president every year since. Since then, she’s devoted 13 years of service to the Girl Scouts of America, during which she earned her Gold Award by providing enrichment classes for at-risk youth and won a President’s Volunteer Service Award for “training and nurturing the young leaders of tomorrow.”

A high school senior, Nagel recently earned top honors from the La Cañada Flintridge Chamber of Commerce and Community Assn. for his summer internship with the Allen Lund Co. A member of the La Cañada Assisteens — the student branch of the Assistance League of Flintridge — he currently leads 67 students as chair and served as vice chair his junior year.

Nagel helped create the LC Lens, a student-run independent multimedia journal, and is a member of the school’s cross-country team. In 2015, he competed in the National Sports Medicine Competition. Nagel plans to attend Northwestern University in the fall.

“These kids are really amazing,” Thompson said of the student recipients. “I didn’t do as much in my first 10 years of working as they have in high school.”