You are here: Home › Posts › the Eastside – Operation School Bell is in Full Swing 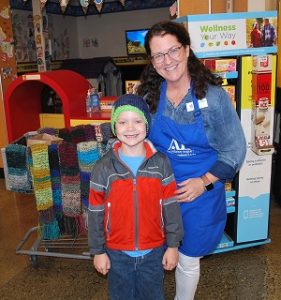 Assistance League® of the Eastside member Vanessa Strothers with one of the students at the 2018 Operation School Bell® event at the Totem Lake Fred Meyer.

Families in need with kids in the Northshore, Lake Washington and Bellevue school districts are getting a much needed helping hand, thanks to the efforts of the Assistance League of the Eastside.

Operation School Bell® now in its 22nd year locally, gives qualifying students, ranging from elementary thru high school, the opportunity to shop locally for school clothing and shoes, their parents may not otherwise afford.

Students K-5 get to spend up to $100. Students 6-12 get $150. The qualifying criterion is established by each school district.

Assistance League of the Eastside has raised a six-figure amount for the event and has partnered with Fred Meyer in Totem Lake, Redmond and Bellevue to distribute the clothing to the kids.

“We’ll be spending over $400,00 in October for clothes and shoe for the children,” said Tinku Basu, vice president of marketing for Assistance League of the Eastside. “Fred Meyer has offered us discounts and has provided staff to help.”

The first couple of weeks of distribution at the Totem Lake branch just concluded. The event will be Redmond store now through Thursday, Oct. 17 and will conclude at the Bellevue outlet Oct. 21-24 and 28-29. The hours of distribution are 4:30-7:30 p.m.

The nationwide Operation School Bell program began in 1992. The local chapter undertaken by the Assistance League® of the Eastside stared in 1997.

“We were only serving 60 kids in one school back then,” said Assistance League of the Eastside President Mahrukh Motafram. “Today were are serving 3,000 kids in 74 schools in three school districts.”

Some of the current kids, Operation School Bell Co-Chair Rosella Butler said have benefited from the program for the past five or six years.

“We all know school can be tough on kids whose families are less fortunate than most — the clicks and standards they are judged by. But school counselors are telling us the kids fell more confident — feel good about their selves when they are wearing new clothes — and that they are more engaged in school.”

“It’s such an amazing program. The students and parents are always so excited to be selected,” she said. “We believe that the impact on the students matches the overall goal of the program to increase student’s self-esteem and well-being. Sometimes they’ll (the kids) come back after shopping event and show us what they received.”

A former recipient of Operation School Bell Daniel Astudillo, who is a 2013 WSU grad with a Sports Management degree and works with kids at the YMCA, recalls how he felt about the program.

“To be able to purchase clothes that say this is you made me feel good. It gave me confidence and self-esteem. To be able to hold your head high — to succeed — makes you feel like you belong.”

It also made him feel like he wanted to pay the experience forward.

“It’s inspired me to help others — I was helped therefore I want to help. And you can help too. Your donations make a difference.”

Assistance League of the Eastside has clothed over 50,000 students in a little over two decades at a total expenditure of more than $5 million. Quite the operation for a local nonprofit all-volunteer organization that some say is the best-kept secret on the Eastside.

The organization is also an advocate for children and adults touched by hardship or violence. Through its Assault Survivor Kits® program, Assistance League of the Eastside distributes thousands of assault survivor kits to over 40 hospitals statewide.

“The kits are made up of sweats, and hygiene products. Often victim’s clothing is confiscated by police upon admission and used as evidence in the crime. So they have nothing to wear home — but can leave the hospital with dignity,” Basu said. “Our fly girls as we like to call will drive anywhere in Washington there is a need and drop off the kits.”

The program costs the Assistance League of the Eastside roughly $10,000 annually.

Two additional programs offered are Starting Over Support, which provides welcome baskets to local shelters for families impacted by hardship and domestic violence and Help4Homless that provides baskets with household items to local shelters and agencies for women affected by economic hardship.

Assistance League of the Eastside has a spring silent and live auction and fundraising event scheduled April 18, 2020, to help generate revenue to sustain all four philanthropic programs. But they could very much use the assistance of one of the many large corporations conducting business in the local area.

“We do have matching funds from Microsoft and we were given a $20,000 grant from the Wockner Foundation, but we need big donors to contribute to the cause,” Basu said. “So we are hoping to partner with the likes of Amazon, Starbucks, Google, Nordstrom or Expedia, whom all do business in the area. A small donation from each of them will go a long way.”