The History of Assistance League of Corvallis

At the first meeting in February, 1968, held in the Consumers Power meeting room at 9th Street and Garfield Avenue, the group elected officers and selected Operation School Bell® as their first philanthropic program. Clothing was received and displayed in Hal Whiteside’s old real estate office on Witham Hill.  In early 1970, Operation School Bell moved to the second floor of Anderson’s Sporting Goods — where it was cold in the winter but rent free.  That fall, regular meetings moved from the Consumers Power building to the Corvallis Country Club, where the group met until May, 2007. On May 15, 1969, National Assistance League granted us Guild status. On May 12, 1970, the Corvallis Guild became the 49th chartered chapter of National Assistance League.

Most board and committee meetings were held in members’ homes until 1972 when we purchased a house at 534 NW 4th Street to be our headquarters for Operation School Bell and other activities.  In 1994, we sold the 4th Street house and purchased another at 547 NW 9th Street.  We renovated the house and paved the adjoining lot for parking.  This house is still the center of Assistance League activities except for the monthly meeting, which is held at the The Clubhouse in Adair Village. 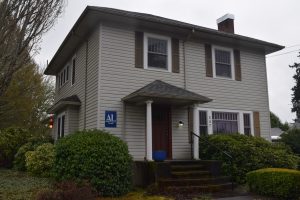