The program provides personal kits for children and adult survivors of abuse, sexual assault, and domestic violence whose clothing was destroyed by the perpetrator or retained by the police for evidence. The Assault Survivor Kits include a new top, pants, underwear, socks/flip-flops, sports bra, a bar of soap, toothpaste, toothbrush, comb, shampoo, and a stuffed animal for children. Assistance League’s members purchase items, assemble, and deliver the kits to trauma centers. 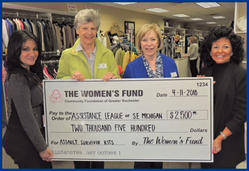 Assistance League of Southeastern Michigan received a generous gift of $2,500 from the Rochester Women’s Fund to benefit the Assault Survivor Kits Philanthropic Program. This program provides new clothing and toiletries for survivors of abuse, sexual assault and domestic violence whose clothing are destroyed by the perpetrator or retained by the police for evidence. Since 1994, over 16,000 survivors have benefitted. The check was presented to Assistance League President Rosemary Dirksen and Grant Committee member Barb Bakker by Kelly Dean and Kathy McCarter, Board Members of the Rochester Women’s Fund, an endowment fund that supports nonprofit organizations dedicated to enhancing the lives of women and their families. 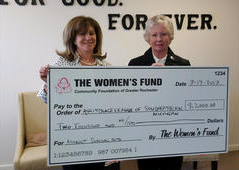 Assistance League of Southeastern Michigan received a $2,000 grant check from the Women’s Fund to benefit the Assault Survivor Kits Philanthropic Program. This program provides personal kits for children and adult survivors of abuse, sexual assault, and domestic violence. Since 1994, over 16,000 survivors have benefited. The check was presented to Marjorie DiLiddo, Assistance League past president by Cindy Nicholaou, Advisory Committee of the Women’s Fund, an endowment fund established in 2000 with a vision to financially support nonprofit organizations dedicated to improving the lives of women in need.

Student members of the Rochester High School (RHS) Key Club donated $300 to the Assault Survivor Kits program, provided by Assistance League of Southeastern Michigan, to support survivors of sexual abuse and assault. Jennifer O’Toole-Seyka, RHS counselor and Key Club advisor, shared information with students about Assistance League’s program that provides fresh clothes and personal items to survivors of assault-an immediate need that comes at a difficult time. “The students decided they wanted to be a part of this program that brings some comfort and dignity to the survivors,” O’Toole-Seyka said.

The annual Assault Survivor Kits Committee meeting on Wednesday, May 25, 2016, welcomed three new members to our dedicated group of women. We celebrated the distribution of 1,177 Assault Survivor Kits this fiscal year, and the addition of six new facilities in locations from here in Rochester, to Escanaba in the UP. Tremendous effort by our liaisons has brought comfort and dignity to victims of rape and domestic abuse throughout the state of Michigan. In addition to reviewing the Assault Survivor Kits program procedures and responsibilities, our members cheerfully recognized the wonderful work of the Red Nose Charity who supports children in need. 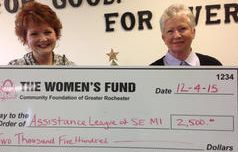 The Women’s Fund, of the Community Foundation of Greater Rochester, generously donated $2,500 to Assistance League of Southeastern Michigan to provide Assault Survivor Kits for victims of sexual violence and domestic abuse in local hospitals. “The harsh truth is that victims of rape and sexual abuse must leave their clothing with law enforcement officials as evidence. Survivor kits contain new clothing–including pants, underwear, socks, and a top–and personal hygiene products, so these already devastated women have something clean and comfortable to wear home,” said Marjorie DiLiddo, Assistance League president-elect, who accepted the donation from the Women’s Fund. 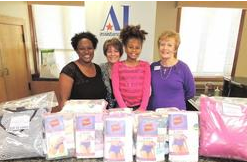 Special ‘THANK YOU’ to Tiffany Piggeé-Taylor & Daughter Jaimyn for Their Generous Sponsorship!

As a sexual assault survivor and in support of Sexual Assault Awareness and Prevention Month in April, Tiffany Piggeé-Taylor, owner of ME Beauty Studio in Rochester, Michigan, wanted to ‘give back’ and help others. She accomplished this and increased community awareness by sponsoring the donations of over $1,000 and 2,500 new underwear for Assistance League of Southeastern Michigan’s Assault Survivor Kits. Through their charitable efforts and the help of generous donors, we will be able to provide underwear for 2,500 Assault Survivor Kits.