You are here: Home › Posts › Greater Portland – Season of Sharing 2015 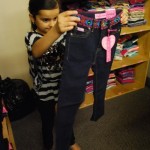 Photos by Wendy Owen of the Oregonian 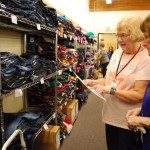 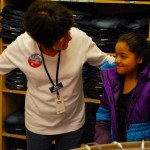 A place to live, a healthy meal, a warm coat, a helping hand:  Season of Sharing 2015 makes wishes come true

Even the most bashful youngster couldn’t help but smile at herself in the full-length mirror after pulling on a new warm coat at Operation School Bell in Beaverton.

On a chilly Saturday morning in October, parents and kids from a couple of Beaverton elementary schools stepped into the program’s headquarters, where racks of new jeans, T-shirts, coats, dental supplies, undergarments, socks and books awaited. They also got gift cards for Payless Shoe Source.

By the end of December, the volunteers at Operation School Bell, a program of Assistance League of Greater Portland, will have helped outfit at least 700 K-5 students in Hillsboro and about 1,000 in Beaverton. All were referred by their schools for the program, which targets kids from low-income families.

What your donation can do

$125: Provide a gift card for a middle or high school student to buy clothing during a supervised shopping trip.

“We purchase everything wholesale,” said Allison Mudrick, chairwoman of Operation School Bell, which is run by about 60 volunteers.

The program expenses are about $323,000, raised through thrift and consignment store sales as well as major fundraisers. Operation School Bell has helped clothe more than 15,000 children since 1998, Mudrick said.

“It’s wild,” Mudrick said of the shopping trips. Because the kids know they’ve got a limit, they come with calculators and coupons to get the most for their money.

But the real fun lies with the younger kids who get to select their clothes from the racks at Operation School Bell. The little girls usually jump up with a big grin while the boys pretend to be nonchalant.

In the waiting room sat Coral, a junior at Aloha High School whose younger siblings have benefited from Operation School Bell. (The Oregonian/OregonLive is using students’ first names only at parents’ request.) The program wasn’t available in Beaverton when Coral was a youngster – it started there in 2009 – but she tagged along with her brothers about four years ago.

“There was a lot of confusion,” she said. Several families spoke only Spanish and the volunteers spoke only English.

“I saw the struggle and I offered my help,” Coral said. She was 12 and was used to interpreting for her mother.

“Since my brothers were getting (clothes), I was like, ‘Shouldn’t we be giving back help?’ ” she said. “My parents thought it was a good idea.”

Volunteer and retired teacher Tish Shinn said Coral “changed the whole atmosphere. Instead of people feeling anxious and nervous, they were happy and laughing.”

The teenager hasn’t missed a Saturday since. She and a group of mostly retired teachers help outfit kids once a week. The variety of languages has grown over the years, but Coral’s services are still needed.

“One thing she’s really good at is taking the kids who are really shy and making them feel comfortable,” Shinn said.

Coral said her favorite part is when a volunteer calls a child’s name. Coral gets to say, “Ready to go shopping?” She loves to see the smiles.