You are here: Home › Posts › Kansas City – Keeping the Next Generation Safe 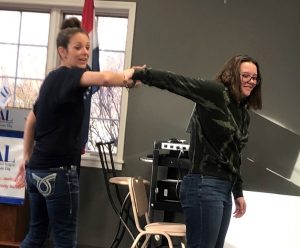 Safety is something we all take for granted. We head out everyday to the grocery store, to the bank, or to go do some retail therapy. We never think about becoming a victim of violence. Every 73 seconds someone becomes a victim of sexual assault and there are nearly 300,000 robberies that happen every year. This isn’t something that we think will happen to us, it is something that happens to someone else.

An attacker is looking for certain types of people to become a target. These people are the elderly, someone that is more fragile and can be easily overtaken. College students are targeted because they usually have money and/or electronics. And attackers will go after men too, because men are less likely to yell for help and more likely to never report the incident because of ego and pride.

Because of some of these things the world can be a scary place. I wanted to bring in a speaker that could teach our Assisteens® how not to be a target. I am lucky enough to know someone who teaches situational awareness.

Megan Kimberlin, even though growing up in a law enforcement family, still fell prey to victimization. 5 stalkers later (1 serious enough to attempt to kill her), she finally learned it can happen to anyone and she wasn’t alone. Her goal and passion in life became giving others the tools necessary through her own personal experiences to help them avoid similar tragedies. She found her voice in helping others find theirs. She works as closely as possible with law enforcement (if she didn’t, family reunions would not be much fun), and attends as many seminars as possible including Forensic Investigation Seminars to have a better understanding of the predator mind. Later becoming a member of Clay County Juvenile Center’s Community Justice Board and the Youth Protection Officer for Rotary International. Since then, her work has been noted in the Sunday edition of the Kansas City Star and as far away as Ecuador and France.

Megan came to our meeting and the very first thing she said was to keep your head up and to stand tall (no slouching). She told our Assisteens that if you made eye contact with those around you that you are reducing your chances of being a victim. The reason is that you can identify the attacker because you saw his/her face.  You are also more aware of what is going on around you and it’s not as easy to surprise as someone who is aware of their surroundings versus someone with their head down looking at a phone or the ground.

Megan stressed looking around you and knowing who is close to you. Sometimes that is easy. For example, a meeting that always has the same people, you know everyone there. The question is, do you look up from your papers or phone to notice? Other times it’s a little harder, for example when you’re out with friends at a store, do you notice if the same person is following you through the store or that they followed you into the store from the parking lot? To prove her point, Megan asked if anyone could identify the gentleman in the back of the room, not even 10 feet away from our Assisteens. Nobody could, and only a very few even knew he was there, and he had been there before the meeting even started.

Megan went on to tell and show our Assisteens some ways to get out of hand holds, neck holds and gave some tips on how to identify the attacker.

I believe everyone walked away with a new understanding of how not to be an easy victim or a victim at all.