Assistance League, founded in California, is the first nonprofit, nonpolitical, nonsectarian organization to recognize the potential of volunteers helping those less fortunate to a better, more meaningful life. The first chapter began in Los Angeles in 1919.  As the area grew, more chapters were formed. To support the growing number of chapters, National Assistance League was organized in 1936 and incorporated in 1949. From this modest beginning, Assistance League has grown to 120 chapters with over 26,000 members throughout the United States.

In 1992 they took a leap of faith and purchased the Harding Way property through self-financing.  It was a dingy, dirty place, but it was theirs!  With hard work and muscle, the ladies and their menfolk turned it into what became a twenty-year icon: the yellow Assistance League Thrift Shop. Half of the 8,000 square foot building was rented to a grocery store. Finally the twenty year dream of occupying the entire building began to come true: in 2012, the membership voted to take over the whole building; thus began a four year saga of challenges and changes.

A “Facade Improvement Grant” from the City of Stockton/Federal Government was awarded to us in 2014, and the building has taken on a new, rather classy look of slate gray and indigo blue with brand new windows and doors. Our thrift shop moved into the previously rented grocery area, which doubled our retail space. Work and storage space also doubled, and we were able to establish a chapter house with offices and a conference room.  The saga finally came to an end when we held our Grand Opening in September 2016!

Was the Expansion Really Worth it?  By the end of 2016, the thrift shop’s income had increased by 40%; there was a 40% increase in our Constant Contact mailing list for customers; old and new customers raved about the improvements; the doubling of work-storage area allowed us to accept more donations including larger furniture, as well as improving working conditions for our member-volunteers; and the Board no longer had to hold meetings in a church’s meeting room, but enjoyed our own conference room with all records and files at the ready.  So yes, the four year saga has proved to have been worth every penny, every bit of ‘blood, sweat, and tears’.

Through the years, we have worked to improve the lives of children-in-need through dental, literacy, cultural, and basic-need programs. Our philanthropic programs are supported by proceeds from our thrift shop, many donations from the community, and generous grants from United Way of San Joaquin County as well as many small grants from other organizations.

The Thrift Shop’s Pictorial History
From 1989 to early 1992, we rented space on shady West Fremont St. 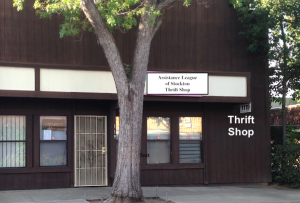 In 1992, our ladies purchased the property on East Harding Way.

Our members self-financed the cost and transformed the building into the bright yellow thrift shop seen below.

At last, in 2016, the twenty-year dream came true! The whole property was occupied by our chapter. The beautiful facade improvement is shown below. 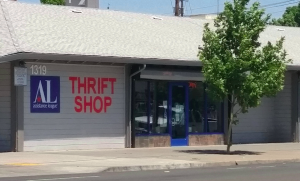