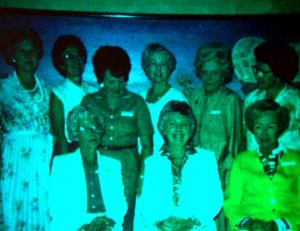 Assistance League of Victor Valley was founded in 1979 and, under the leadership of Mmes. Joseph Campbell, Hanley Heikes and Timothy Hoiles, attained Chapter status on May 26, 1982, becoming the eleventh chapter in Region III and the 70th chapter of National Assistance League.

National Assistance League is a nonprofit, nonpolitical organization. Public support funds raised by chapters are returned to their communities through philanthropic programs. Victor Valley chapter directs its funds to the elementary school children of the area.

After researching community needs, Project R.E.A.D. (Read, Enjoy, and Develop) was established in 1979 to assist, on a one-to-one basis, school children in the development of reading and comprehension skills. The San Bernardino County Juvenile Justice and Delinquency Prevention Commission recognized Project R.E.A.D. as an outstanding youth program. In conjunction with Project R.E.A.D., hand-held computers, special books, and kits requested by teachers, were donated to four elementary school districts. A vision-screening program was initiated and an emergency fund for eye-related problems was established.

By remaining aware of community needs, programs have been added or discontinued as funds permit or needs dictate. Funds have been made available for binding of books written by school children for the annual “Young Authors Conference” and, since 1987, contributions have been made to the Apple Valley Science and Technology Center for its library and video expansion fund. In 1998, the center was officially renamed the Lewis Center for Educational Research. Vision screening was discontinued and, in 1986, the chapter adopted Operation School Bell, which became operational in 1987. Through this program, children who would otherwise not be suitably or adequately clothed for school, are furnished with up to two full sets of clothing, upon recommendation of authorized school personnel. Forty schools, in seven school districts, now benefit from this program, with 718 children served in 2000-2001.

In 1987, Kids on the Block™ was adopted by our chapter. The “kids” are puppets, manipulated by trained puppeteers performing with set scripts, which helps children understand the problems, differences, and capabilities of disabled youngsters being mainstreamed into the classroom. Since then, scripts covering social issues have been added. They include child abuse, divorce, and gangs. At the request of school authorities, the puppets visit classes in all seven elementary districts, presenting the programs to an average of two thousand pupils a year.

In 1989, Operation Hug was approved by the chapter. Cuddly bears, dressed in colorful tee shirts bearing the chapter logo, are donated to hospital emergency rooms for distribution to children in physically and mentally traumatic situations.

On July 5, 1995, the Common Cents Thrift Shop was opened. This is a year-round fundraiser for the chapter’s programs. Previous (and continuing) funding has been made possible through two major annual events: the Home Tour, established in 1979, but suspended in 1996, and the Spring Ball, initiated in 1988, now referred to as the Spring Fundraiser.

During 1995, a chapter logo was approved to be used for the furtherance of the chapter’s identity and image in the local community. In addition, the chapter office and Operation School Bell were moved to a new location in Apple Valley. Later in the year, Operation School Bell was moved to quarters next door to the thrift shop, and in December 1995, escrow was closed on the purchase of the commercial building in which they are housed. In 1996, the chapter office was moved into the building. In addition to the office facilities available, complete with a new computer, there is room for committee, board, and regular meetings.

In 2001, after much planning, a room was added to the thrift shop to provide more room for sorting and storage. This room was later named the Jean Russell room in memory of one of the thrift shop founders.

Another big project was completed in 2002. The office and meeting room were enlarged.

The year 2004 brought a big milestone for Operation School Bell. The 10,000th child was outfitted. The age level was increased to include preschool children. Again, reacting to the community’s need, Assault Survivor Kits®, consisting of a full outfit of comfortable clothing, were assembled and distributed to the Rape Crisis Center. New heights were reached in thrift shop income, grants received, and donations to Sock It To ’Em, which allowed these expansions.

In an attempt to raise public awareness of both Assistance League and Operation School Bell, in 2006 our members spoke at numerous professional and fraternal organizations. In addition, our Chapter elected to participate as a sponsor for the Newspapers in Education (NIE) program. This is a win/win situation—not only do we sponsor newspapers for five elementary school classrooms in the Victor Valley, each Monday the Assistance League logo appears on the NIE page in the local newspaper—a great way to get Assistance League of Victor Valley’s name out in the community.

In 2008, a new philanthropic program was undertaken—I’m In Charge! This is an educational program designed to support families as they begin to teach children age-appropriate safety skills when they are alone at home or on their own.

In May 2009, our chapter’s website was brought online. This website is a great public relations tool since it will enable us to tell our story to a much greater audience.

While paying off our mortgage alone made 2009 a milestone year, a number of other events occurred as well. Our logo disc was installed and is on display at the City of Victorville’s monument area, further increasing our visibility within the community. The thrift shop, grants received, and donations to Sock It To ‘Em all exceeded projections with thrift shop income at an all-time high.

In 2010, Operation Hug grew by over 30%, the Assisteens® auxiliary ended the year with 35 active and enthusiastic members, and I’m In Charge! added another school district. Common Cents Thrift Shop achieved another all-time high-income year.

During 2011, the chapter expanded in a number of ways. Operation School Bell had now clothed over 19,000 since it started in 1986; Project R.E.A.D. increased funding to bind books by 100% due to more schools participating in Young Author’s Conferences; Science & Technology funding expanded by 140% and Operation Hug grew by 27%. The Common Cents Thrift Shop purchased a shed to help ease storage issues and again surpassed their budgeted income goal. Assisteens ended the year with 37 members who contributed time and effort to their philanthropic programs, as well as providing assistance to the chapter in Operation School Bell and the thrift shop.

The 2013-2014 fiscal year brought changes to the chapter. The I’m In Charge! program was discontinued due to lack of use by the school districts. In It To Thin It, a weight loss program for high school students in the community, became a new project. Our chapter funded supplies for court-ordered counseling sessions to Lucerne Valley Domestic Violence Outreach, Inc. Operation School Bell clothed an all-time high of 1,310 students this year. We made a major change in the distribution of school clothing to local students beginning in March 2014. Partnering with Kohl’s will ensure that students receive clothing that best suits each individual. The thrift shop changed its name from Common Cents Thrift Shop to Assistance League Thrift Shop. Our spring fundraiser was a success, with a record number 226 attendees. Assisteens graduated 16 seniors, all proudly attending college in the fall. Membership has increased by 8%, well above the targeted number in the Strategic Plan.

During the 2014-2015 fiscal year, the partnership with Kohl’s proved to be very successful. More children were served in a shorter period of time, no-show rates continue to decrease, and parent and school surveys show 99% approval of the program. Project R.E.A.D. increased its budget to meet the growth in the Young Authors program and in support of Science and Technology for elementary, junior and senior high schools. The Spring Fashion Show, Sock It To ‘Em mailer, grants, community donors and the thrift shop provide funds to support all philanthropic programs. Participation in National’s “Make A Difference Day” was a success. Elementary and junior high school libraries were the recipients of over 2,000 books collected each year. Facebook, Constant Contact, newspaper ads, our website and being a GuideStar gold participant help provide continued visibility to the community. A Social Media Policy was introduced. Software was updated. We established a Pay-Pal and eBay account and brought our website in-line with National. Recommendations from National led to a change in membership requirements. Flexibility in how we volunteer was implemented. Assisteens continue to serve the community, as well as support the chapter. We are proud of several past Assisteens who are now pursuing advanced degrees in engineering, medical, and dental fields.

The fall of 2016 brought the long-anticipated remodel and expansion of our building. Our meeting room was expanded for greater occupancy. New office space was added and the thrift shop increased in size by 783 square feet. Thanks to the dedication of members, increased marketing, and the new look and additional space, customer satisfaction is the positive result.

During our 2017-2018 fiscal year, we not only excelled at fulfilling our commitment to the Victor Valley community, but also achieved the goals of our five-year strategic plan which ended this year:  We increased our membership by 10%, increased our funding through our thrift shop, annual fundraising and grants, and continued to give back to our community through our philanthropic programs.   We have now begun work on our new five-year strategy to take us into the future. Although we continue to have ‘flexible’ membership, our members gave a record breaking 29,000 hours of volunteering!   Half of those hours were spent in the support of our thrift shop. We have built a strong and growing customer base with over 500 customers now on our mailing list for our weekly sales. Our Operation School Bell program continued our partnership with Kohl’s, Fallas and Payless Shoes, providing for 1,357 students, bringing us to over 27,000 since inception of this program. Plans are in place for our new partnership with Target in the year ahead. We implemented National Assistance League’s ‘Outcome Survey’ and the results showed that over 85% of our students demonstrated a positive significant change in classroom behavior, confidence and level of engagement with peers. This year we sadly said goodbye to our Kids on the Block program, but the puppets went to a good home at the Lewis Center. Our participation in National Assistance League’s annual book drive, was the most successful to date, with a record 5,025 books collected and distributed to local schools, libraries, family centers and the Professional Firefighters Association. Lastly, we had a year of successful ‘firsts’ that we will continue on into the future: First annual ‘Come Fly with Us’ fundraiser, first annual Assisteens ‘Mad Hatter Tea’, and first annual Open House (for prospective members)!

Our History At A Glance

Improved our facilities by resurfacing our parking lot, purchasing a new storage shed to help handle the increase in donations, and ordered a new and more visible sign for our thrift shop. 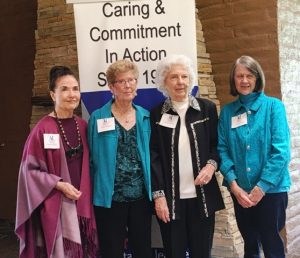 The 2017 installation meeting was a celebration of our 35th Anniversary.  Several founding and long-time members were in attendance.  As the 70th chapter of National Assistance League we continue to grow and meet the needs of our community through our philanthropic programs. Operation School Bell expanded to include a partnership with Fallas Department store.  Payless Shoe cards are, once again, available.  Young Authors continues to grow with more schools participating, and the number of bears and assault survivor kits we provide are sufficient.  We are in the fourth year of our five-year strategic plan.  We continually strive to increase our membership, are developing qualitative and quantitative measurements for our philanthropic programs, and we maintain sufficient funds through our ongoing fundraisers, generous donations and a very productive thrift shop.  In the final year of the annual Make a Difference Day book drive, we exceeded expectations by collecting over 3,000 books for local school libraries.