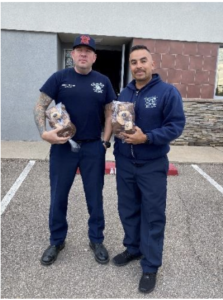 One child asked if it was possible to be given a different stuffed animal because they already had seven of the bears due to the repetitive number of traumatic situations that they had suffered through.

One young middle school boy, who tried to present himself as being very tough and unapproachable was seen carrying a Buddy Bear at school one day. When asked why he carried the bear, he responded that when he was given it, he felt loved and that someone cared about him for the very first time in his life.

A young woman received a Buddy Bear when she was suffering a traumatic situation as a young girl. She always kept it until the little girl next door to her was dying from a severe illness. She took the bear over to her to bring her the same amount of comfort and hope that the bear had given to her initially. The little girl’s mother buried the bear with her daughter when she passed away.

A father was left with seven children to raise and care for when his wife passed away from cancer. All the children were under the age of ten. He asked if we would give each of his children a bear to bring a little bit of happiness into their lives.

The Bernalillo County Sheriff’s Department commissioned and has on display a beautiful bronze statue as a testament to the power and love of this program at their Command Center on Fourth Street.